Rathinagiri wrote:This is nice one. IMHO it can be used as an alternative to in-place-edit feature of Grid.

When an user double clicks/presses enter key, an InputWindow shall be opened and the grid data can be updated according to the InputWindow data. Initial data/label can be got from headers, widths, columncontrols, columnvalid, columnwhen etc.

When an user double clicks/presses enter key, an InputWindow shall be opened and the grid data can be updated according to the InputWindow data. Initial data/label can be got from headers, widths, columncontrols, columnvalid, columnwhen etc.

I will think something could if be done for auto-detecting. But the main idea its so good !

Thank you Rathi ! And please anybody be free to make any modification or suggestion.

Rathinagiri wrote:This is nice one. IMHO it can be used as an alternative to in-place-edit feature of Grid.

Yes, this is a great idea

Thank your Rathi to make remember.

By the way, I wish to refresh that also we can count with the new InputBox() we can make individual cell editions.

One example we have at ViewError in Grid as source editor when we double click in the specific line of source. 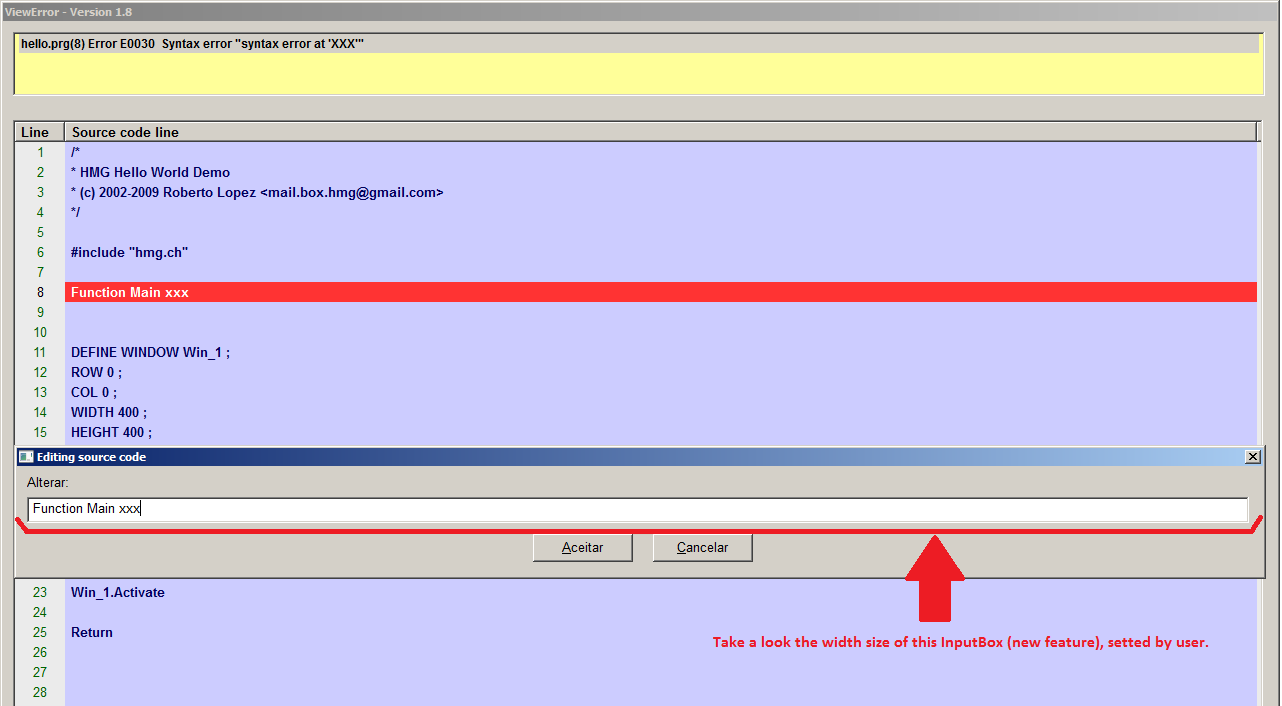 I think is going to be posible to do an easy way to implement InputWindow in Grid editing cells automactically.

In the example in attached is being defined as InputWindow2() as as a pilot test.
Then when is approved by HDT (HMG Development Team) we probably count to use it.

This example is going to be improved, changing different fields in Grid, like as for: DatePicker, ComboBox, Numeric TextBox, CheckBox and probably EditBox.

Now is working as string fields, but I need to test with all kind of Grids (with RowSource, with ColumnControls, with OnSave, with Virtual, with LockColumns, probably with ColumnValid and ColumnWhen too).

It's not replacing fields values into the Grid yet. So there much thing to do it about. In order to make easier usage. The main idea is just to add InputWindow(<Form_Name>,<Grid_Name>) at ON DBLCLICK event of Grid.
Very easy for user implement, doesn't it ?

Even I have not finished yet, I will leave the available here in attach executable and sources files for your appreciation.

I hope you enjoy it !

Good to know you enjoyed.

Probably It's going to take a little more time as used it could take, because I on vacations... but I love to growing up with HMG

I got this chance to get better thanks to our friends (good Rathi idea and Claudio's work with Grid, very impressive improvements).

This watermark in Grids is useful sometimes.
Probably his example C:\hmg.3.4.0\SAMPLES\Controls\Grid\GRID_40 should it be improved to show that !

Thanks to everybody whos makes comments, give new ideas and work together

Nice. There is a long way to go. But once it is over, I am sure it is a valuable module for HMG.
East or West HMG is the Best.
South or North HMG is worth.
...the possibilities are endless.
Top
Post Reply
117 posts